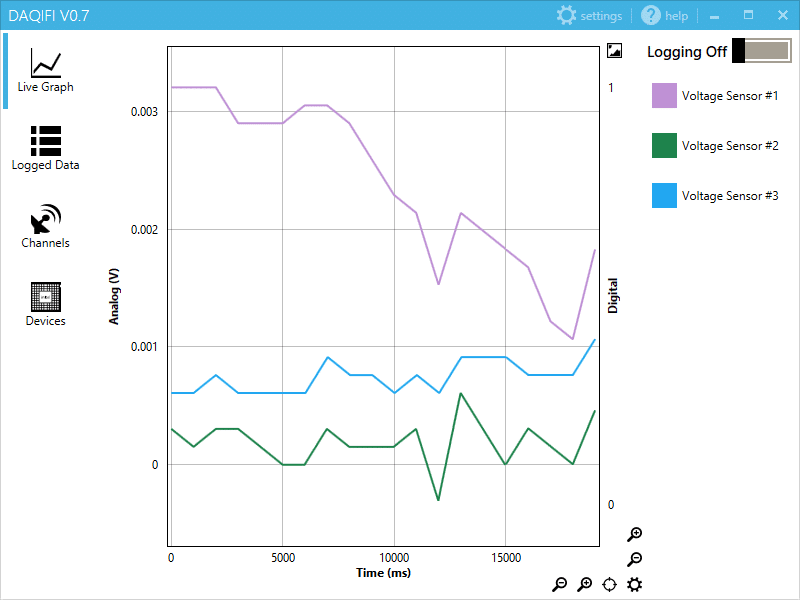 Data acquisition (DAQ) systems on the market are cumbersome, hard to use, require a wired connection to a computer, and have antiquated software. Even worse, most DAQ software only allow the user to connect to a single DAQ device. Simply put, current DAQ systems provide a poor user experience. DAQifi is solving this problem by making user experience a priority. One opportunity to focus on user experience is through the desktop application.

In desktop applications, a modern user interface is important. Gone are the old, ugly interfaces of Windows 98, which most DAQ software still seem to levitate towards. DAQifi has developed a modern desktop application with the user in mind. The user easily and intuitively adds multiple DAQifi devices to a single computer, configures channels, and starts logging data in under a minute. DAQifi devices are connected wirelessly to the user’s computer through the user’s already existing wireless network. This means the user can have flexibility on where to place the DAQifi devices; no need to run long wires to the computer.

Another key to great user experience is listening to the user’s needs. DAQifi developed a minimum viable product (MVP) which included basic features users would expect such as: real-time data logging, archiving the data, and exporting the data to Excel so it can be analyzed. The MVP is the foundation for which features are added to through understanding customer’s data acquisition needs. In beta testing, DAQifi quickly validated that being able to downsample and average data was a key for customers to manage large amounts of data. This feature was added to the MVP and is now widely used.

Recently, DAQifi has learned that scaling inputs is extremely valuable. As such, input scaling is being included in the next release of the desktop application (v0.8) which will be available within the next couple of weeks. The current version of the software (v0.7) can be found at https://daqifi.com/support.